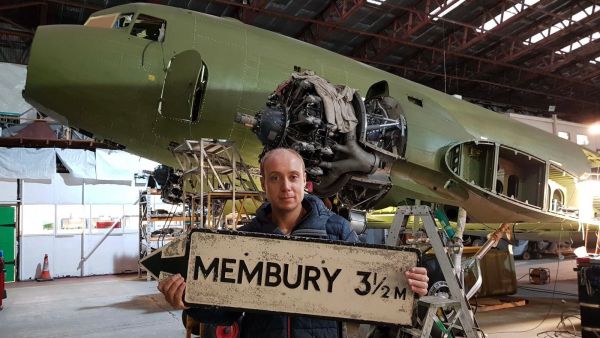 A director of a UK logistics company is getting close to realising his dream of returning a historic US-built aircraft to the skies.

Walker Logistics head of marketing Charlie Walker says the hopes that a C-47 currently under restoration will make its first flight towards the end of this year.

The machine was one of the few surviving representatives of thousands of planes built to help the Allies win World War II including the D-Day landings and played a crucial role in other campaigns, including the Berlin Airlift.

The aircraft in question, christened Night Fright – flew in every major airborne operation of WW2 from Membury Airfield in the west of England, where Walker Logistics is based.

Initially Walker Logistics set out to find a wartime plane that had flown from Membury that could stand as a monument at the gates of the airfield to commemorate the role that the village had played in World War II.

But after Night Fright was discovered in a scrap yard in Arkansas the plan quickly changed and it was decided to completely restore the plane and return it to flying condition.

A qualified pilot, Charlie has been at the heart of the project and has been key to delivering what Walker hopes will be”the most authentic flying C-47 anywhere in the world”.

Walker Logistics is also funding the development of a hangar to house Night Fright as well as a museum building to display artifacts and memorabilia.

Charlie Walker adds: “We want to help educate all age groups about the history of Membury and the surrounding area during the Second World War: it’s about honouring past generations and educating future ones.

“Corporate social responsibility is high on Walker’s agenda and we feel that this unique project is an excellent way of paying homage to Membury’ s past as we build for its future prosperity.”