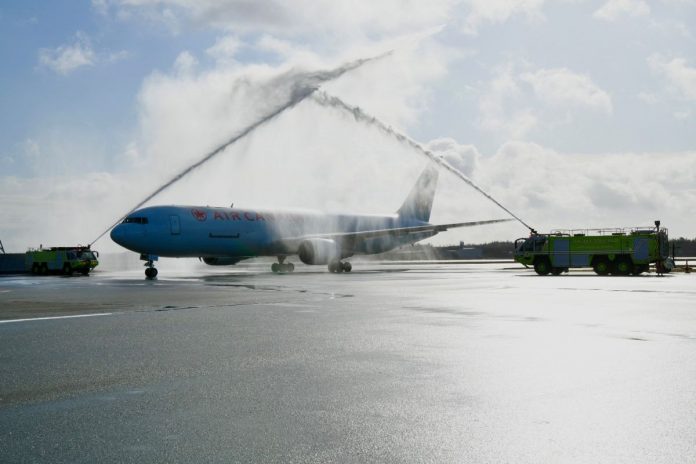 Air Canada operated its first dedicated freighter flight into Halifax Stanfield International Airport on 20 April with its second Boeing 767-300ER to enter service. The addition of this aircraft will allow Air Canada Cargo to start a range of direct freighter services from Halifax to destinations including Frankfurt, Cologne, Istanbul, and Madrid, starting in May.

The inaugural flight from Toronto arrived in Halifax with freight coming from around Air Canada’s global network and was re loaded with fresh lobster, fish, aerospace parts, and pharmaceuticals for the flight back to Toronto for shipment around the globe.

Vice president, cargo at Air Canada, Jason Berry, said: “Atlantic Canada’s economy has experienced important growth in the last few years, with increased demand from North America, Europe, and beyond. Nova Scotia is a key element of our growth strategy and Halifax being one of our first Canadian markets with the freighters further emphasizes the importance we place on our partnerships in the community.”

Nova Scotia premier, Tim Houston, added: “Having stronger air links opens the door for more trade and investment in our province. It means we can build on the already strong relationship with our trading partners and create new ones. This is an important step forward for many of our businesses who will benefit from this exciting growth of Air Canada’s freighter network.”