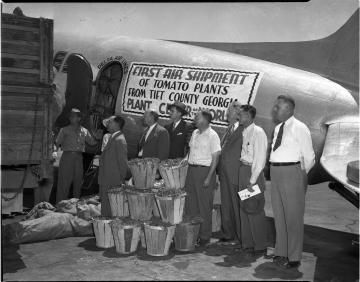 Delta Cargo is marking its 75th anniversary this month, tracing its humble beginnings from a shipment of fresh mushrooms on board a DC-3 to Atlanta in August 1946.

But in a sense, the history goes back further; Delta planes had served the Allies during World War II, transporting everything from food and surgical supplies to weapons and auto parts overseas, which helped Delta turn cargo transport into a full-fledged business.

Milestones in the decades since included shipping donated blood through the American Red Cross to United Nations forces during the Korean War; the first international cargo flights to the Caribbean and Venezuela, in 1953; the first dog to fly on a commercial jet from Houston to New York City in 1959; .a Delta L-100 cargo plane carrying NASA’s Surveyor 3 spacecraft from Los Angeles to Cape Kennedy, Florida; and the launch of DASH, which has become Delta’s most popular cargo product in 1970.

Bringing the story up to date, Delta opens its first Cargo Control Center to improve customer experience in 2017 and in the same year a Critical version of DASH was launched with distinctive pink packaging marking priority shipments.

It also regularly assists with humanitarian efforts, for example carrying over 800,000lbs of supplies to cities in need after Hurricane Maria struck in 2017.

And needless to say, it also has carried essential protective equipment and medical supplies around the world during the Covid pandemic.