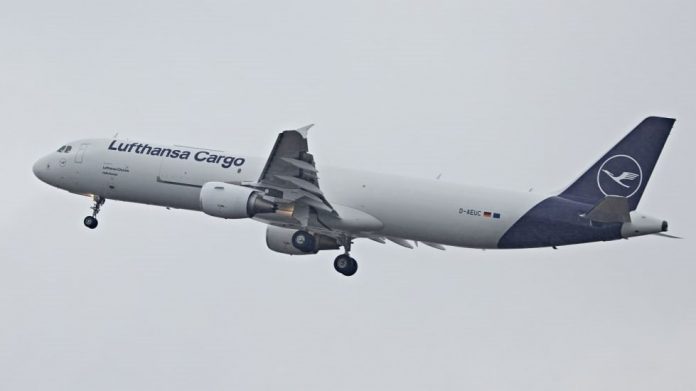 Lufthansa Cargo A321 freighter lifted off for its first commercial flight from the carrier’s main Frankfurt base to Dublin on 15 March.

The aircraft, registration D-AEUC was christened ‘Hello Europe’ before departure and is operated by Lufthansa’s CityLine short haul passenger arm.

Lufthansa Cargo chair and chief executive, Dorothea von Boxberg, said the new freighter would allow the carrier to offer same-day and e-commerce solutions within Europe and to selected medium-haul destinations. The aircraft will initially serve Dublin, Manchester, Istanbul, Tel Aviv , Malta and Tunis with flights to Cairo (being added on 29 March, served two to three times a week from and to Frankfurt.

A second A321F is expected to enter service in late summer, which will allow more destinations to be added.

One of the first missions of the new freighter will be to fly aid cargo to Poland.  The carrier’s chief commercial officer, Ashwin Bhat added that the plane would provide Lufthansa with more flexibility. It could, he said, be used for charter services or even ACMI leasing deals.