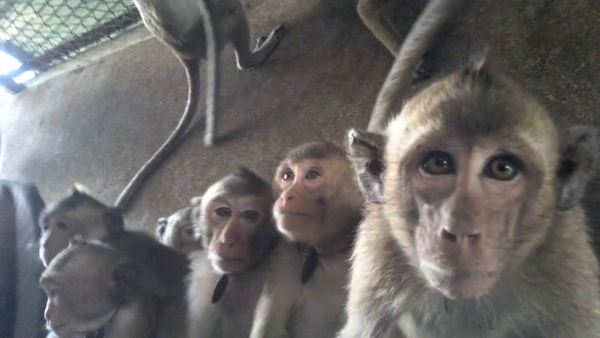 Animal protection organisation Action for Primates has called on Spanish holiday charter airline, Wamos Air, to immediately stop transporting monkeys for research laboratories following the deaths this week of several on board its flight from Cambodia to the US.
On Sunday 14 November a consignment of 720 long-tailed macaques was discovered on Flight EB998 from Cambodia to Houston confined inside small transit crates for a flight of 24 hours and a six hour stop-over in Tbilisi, Georgia – in addition to several hours spent in transit to and from the airports.

In recent months, animal protection groups Action for Primates (UK), One Voice (France) and Stop Camarles (Spain) have spearheaded a campaign across Europe calling on Wamos Air to stop transporting monkeys after discovering the Madrid-based airline was flying thousands of monkeys to the US for research.

Co-founder of Action for Primates, Sarah Kite, stated: ”This tragedy exposes the shocking reality of the suffering inherent in the transportation of these intelligent and sentient beings. It is simply not possible to confine non-human primates to small crates, away from familiar surroundings, and transport them on long journeys across the world without causing considerable distress. It is time for Wamos Air to join the long list of airlines that now refuse to be a part of the cruel global trade in monkeys for research.”

The long-tailed macaque is the most heavily traded primate species for the global research and testing industry, with the US being one of the world’s largest importers. In 2020, imports of long-tailed macaques from Cambodia by the US increased by 82.8% to 15,664 animala. Wamos Air, formerly Pullmantur Air, primarily operates passenger charter flights to holiday destinations and is a subsidiary of the Miami-based Royal Caribbean Group.