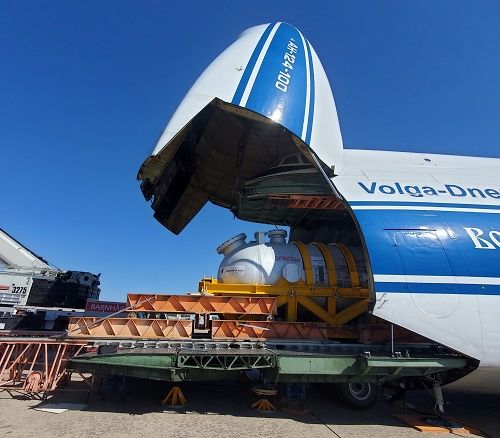 Volga-Dnepr Airlines and forwarder Fracht FWO orchestrated the delivery of an 83-tonne boiler from Milan, Italy to Lincoln, Nebraska, for a power plant in Sioux City, Iowa. The move took almost two months of planning by European and US teams at both companies and design and production of a special cradle.
The flight lasted two days with tech stops in Liege, Keflavik, Gander and Bangor, the latter being included for smooth customs procedures.  After landing at Nebraska, the equipment weighing over 93 tonnes was trucked to Iowa to be assembled.
To see a live stream of the operation: LIVE: An-124 93T load-and-go at Milan Malpensa – YouTube