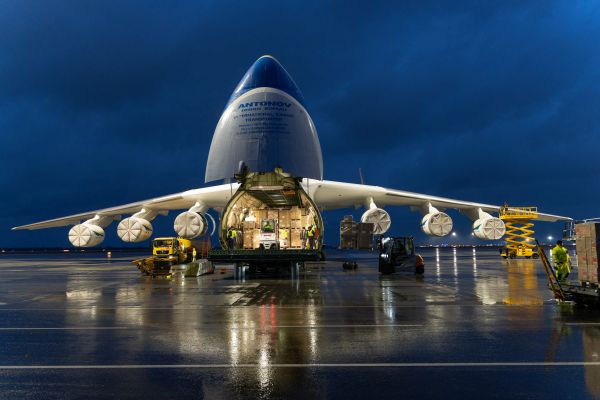 This was the 30th time that the unique plane has landed at the Central German airport, making it one of the most frequently visited by the AN-225 anywhere in the world.

There are plans for the AN-225 to continue flying to Germany during the next few weeks.

The aircraft was unloaded by PortGround, the subsidiary of Mitteldeutsche Flughafen, which specialises in handling planes and cargo.

Leipzig/Halle Airport is a central handling point for medical goods in the battle against the Covid-19 pandemic. It is Germany’s second-largest air freight centre and an important logistics hub for the whole of Europe. In addition to regular traffic, the airport handled more than 100 freight charter flights carrying millions of Covid-19 tests during the last few months with many more expected before the end of this year.

Leipzig/Halle is Europe’s fourth-largest air cargo hub, and freight volumes have been continually increasing for 16 years. It set a new record in October this year when companies based there handled 141,173 tonnes of freight. Freight traffic in 2020 totalled 1.38 million tonnes.

Cargo handled during the first ten months of this year has amounted to approx. 1.3 million tonnes, an increase of 16.9% over the previous year.

It has also developed into a major express and e-commerce centre; the airport is DHL’s largest hub anywhere in the world and it is the first regional air cargo centre for Amazon Air in Europe.

Overall, more than 80 cargo airlines fly to the airport on routes serving over 270 destinations. It handles up 1,300 freight take-offs and landings every week.

The 10,800 people currently employed at the airport and at companies and public authorities based there include around 8,200 in the freight handling, cargo airline, logistics and freight forwarding sectors.