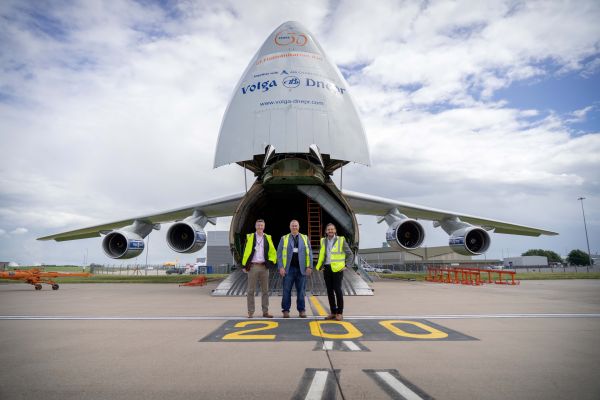 Air Charter Service and Volga-Dnepr Group have celebrated 30 years of on humanitarian missions.

At the end of 1989 Alexey Isaikin  was working on the aviation plant in Ulyanovsk overseeing manufacturing of Antonov 124s and Chris Leach was unemployed but with a wealth of aircraft charter contacts. Shortly afterwards he began working as a broker from his basement in his house in Kingston-upon-Thames. As the Soviet Union collapsed around him, Alexey  Isaikin formed his company, Volga-Dnepr Airlines working with the Antonov 124s that he knew so well.
The entrepreneurs were among the pioneers in bringing in the Antonov 124s to the western charter market. The aircraft had unmatched capacity compared to anything at the time, of indeed since, and changed the face of the cargo charter industry.
Since then the two partners have completed more than 500 charters, a large number of them carrying relief and humanitarian aid and have collaborated in the aftermaths of virtually every natural disaster since the early 1990s.

The first recorded relief charter between the two companies was on an Antonov 124 from Luanda, Angola to Entebbe, Uganda in the early 1990s and since then they have flown boats to help the relief effort following the Asian Tsunami in 2004 or a mobile hospital to the Caribbean following Hurricane Irma in 2017. Following the earthquake in Port-au-Prince in 2010 the airport’s infrastructure was so damaged that only self-loading aircraft could land there with humanitarian aid and ACS and Volga-Dnepr worked together again.
The most recent humanitarian projects have been numerous charters transporting PPE on Ilyushin 76s and Antonov 124s.